One example of this would be a simple item such as a glass of water on an airplane, versus refilling a re-usable water bottle. In one scenario, an individual might bring a reusable water bottle from home, fill it at the airport, and theoretically have enough water for the duration of travel. In the other scenario, a flight attendant opens a single-use water-bottle, dispenses the water into a single use cup, both of which are ultimately disposed of in a mixed-waste bag (recycling versus trash). This simple example showed me the how seemingly small actions can magnify into huge differences in waste generation and material consumption.

This experience has shown me the importance of conscious consumption from the time I obtain an item to the time I dispose of it. Additionally, keeping my waste in a more visual spot (a paper bag in my room) versus the traditional trash bin, enabled me to re-use and repurpose items that otherwise would have gone to waste.

On the my first day collecting trash, I was surprised to realize at how little waste I produced. I suspect that because Mondays are my busiest day of class, I had less time / opportunity to hang around / generate trash. (1x RX bar wrapper not pictured).  -Christopher Tom 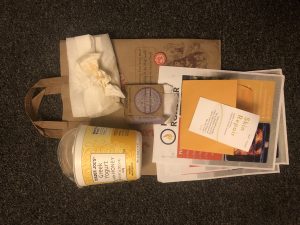