So for a week I was not supposed to be anything, so I decided to put my would-be trash into a box. Then I realized that I could’ve just kept it in a trash bin and not thrown it out. Also I forgot to make periodical posts on my progress rather than talk about my whole experience in one go. Classic Tony. Anyway, this week was when I went shopping, so I probably had more would-be trash than I normally throw out, mainly plastic bags. Despite that, I actually had less trash than I expected to have. The box I used did not overflow with smelly refuse. I understand most trash normally comes from food packaging and stuff, which is probably why I did not end up with as much garbage as I thought. I mainly cook my own meals, and the ingredients I use aren’t packaged individually, so even though I eat a lot of food, I don’t make much waste (except in the toilet, probably). Even with the snacks I eat (such as the bag of Hot Cheetos), I feel that I’m doing a good job controlling how much waste a produce. 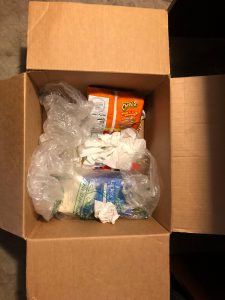