This past week, I’ve been more conscientious than ever about what I use on a daily basis. This exercise has caused me to pause before I throw something away to make sure to collect it and also determine beforehand whether I want to add to my pile or if there was a way around it. At first, I didn’t have anything to really throw away besides coffee grounds and other types of compost. I was happy to see that my lifestyle of packing lunch in tupperware containers and generally cooking meals at my apartment were resulting in trash-less days. Plus, it was easy to make sure to bring a fork if I needed it instead of using one from the Ave.

As the week went on, I began to throw more things away. I broke a bowl by accident, got Starbucks a couple times, and made myself pre-packaged meals, which meant that the packaging had to be thrown away. I also ate out a couple times and bought stuff which all added on. For this intervention, I collected things I would normally recycle and found that it was a lot more than what I would throw in the trash, but these recyclables are things that I, personally,only get one use out of.

This made me think about how many students must be throwing away food packaging, especially freshmen who generally don’t cook and use reusable things. Last year, I was constantly using single-use things that I bought from on-campus food places. As I grocery shop, I do try to buy things with minimal plastic packaging but I think I could do a lot better about it in the future. I hope that other students cut back on their one-use consumption too. This week has shown me that my main garbage items are food packages, which I can work to reduce through selective grocery shopping and carrying a coffee thermos with me. It also showed me that I could easily start a compost bin and that the food I don’t eat could still have use through that. 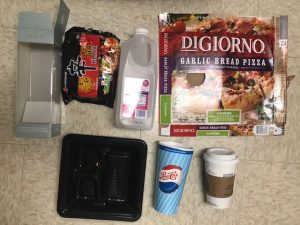