Even before beginning this self-intervention, I was starting to think of ways to reduce my waste. I planned to use air dryers rather than paper towels in public bathrooms, use real plates rather than paper towels or tin foil (no matter how lazy I am), and choose foods at the grocery store that have less associated trash. I also decided to skip my morning coffee this week so I wouldn’t throw away coffee filters or used coffee grounds. I also thought of all of the ways I already limit my waste: I bring my own bags to the grocery store, never use plastic bags for my produce, and use reusable tupperware instead of ziplock bags to store food. I did my best to stick by these plans, but as you can see by the Starbucks cup in my trash pile, I could’ve done better.

A major improvement I could make in the future is buying things in person instead of online. The large packaging bag from Amazon contained a headphone converter for the lightning port of my iPhone–something three inches long that was put into packaging the size of a notebook. This is entirely unnecessary waste that could’ve been avoided by spending an extra ten dollars at the Apple store downtown. Another improvement would be purchasing foods in reusable containers. For instance, I bought pre-made soup from California Fresh in containers that cannot be washed and reused. I also bought Breyers ice cream instead of the ice cream in plastic containers with screw-tops because I prefer the taste of this lactose free ice cream to that almond milk ice cream. In writing this, I realize that both of these purchases were because I put my preferences and money over the ramifications of the waste I created. I think they are both common justifications for the amount of waste we make.

Something I noticed this week was that some of the trash I throw away is hard to avoid. For instance, most Cal Poly bathrooms only have paper towels to dry hands. At the grocery store, I bought my chicken breast at the meat counter to avoid the plastic they use for the pre-packaged meats. Usually they wrap the chicken in paper, but this time they put it in a plastic bag and paper, so the plan backfired. Lastly, there aren’t many food options on campus that don’t have plastic containers or plastic bags. I usually bring my own food to campus in reusable tupperware, but don’t always have the time to make it, so I ended up buying soup in a waxy paper container at campus market on Tuesday.

At the end of this self-intervention I had less trash than expected, but still have a lot of room to improve. I’d also like to note that I ate food and used things this week that will eventually contribute to waste not yet thrown away. I ate cereal out of a cardboard box and plastic bag, almond milk out of a waxy carton, popcorn out of a plastic bag, lettuce out of a plastic container, and nectarines out of a netted plastic holder. I did laundry and used some laundry detergent from the large plastic jug. I took notes with pens and pencils that will eventually dry up or break on paper that I will eventually throw away and read textbooks that will eventually be out of date. This week really made me think about every activity in terms of the waste it creates, and I think that this is important for us all to consider. 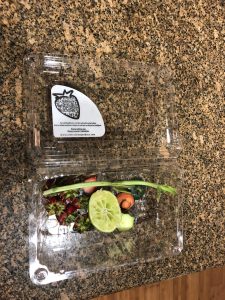 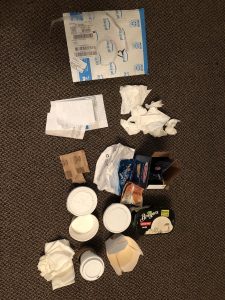 I kept food waste that might begin to smell in the fridge in a strawberry container (which was also waste from this week), while I kept ‘clean’ trash in a trash can in my room.