I think I never felt so happy about throwing trash away… I did it! I did my first ever self intervention! And I feel like I was successful. So what happened since my last update:

During the intervention I got more and more aware of what I throw away. I had to stop me several times while throwing something because I just kept forgetting. But, when it came to buying things like food or hygiene products I funnily never forgot about the intervention and tried to buy the least waste producing products.
Keeping my trash was not an issue until the weekend. Throughout the weekdays I was in class or somewhere else but home. During the weekend I was more likely at home and as I kept my trash in my room, so no one would accidentally throw it, I had it around me all the time. Especially, when I bought sushi the other day it started to get smelly… Not nice!
But in total I can say: I caused less and less trash each day.

This is a picture of my final trash: 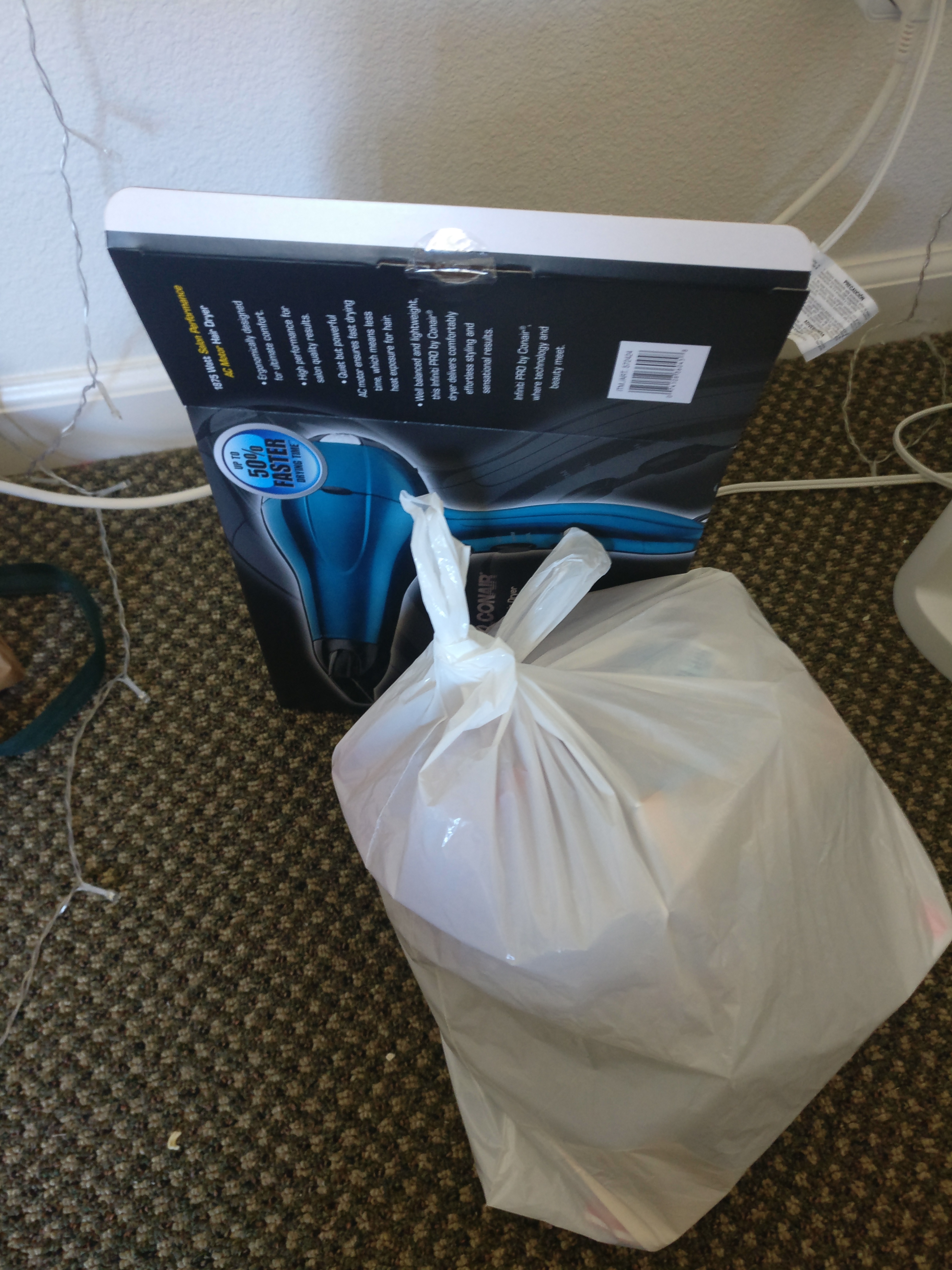 One can see it did not get that much more. Most of it is plastic trash caused by food packaging. I tried to get around all this food packaging but as my schedule is very busy I didn’t get to cook a lot. So I ended up to look for the food option with the least amount of packaging. I think cooking would not have helped either because every single ingredients comes in some sort of packaging. It’s like one just can’t get rid of this plastic… Packaging was definitely the most challenging part for me.

I read through a few other blog contents and often saw plastic bottles lined up. Interestingly, I had no plastic bottle trash. Maybe because my background is a bit different? In Germany we have something called “Pfand”. That means if one buys a plastic bottle , glass bottle or can one has to pay an additional charge, for example 25 cents per item. After usage one can then easily return the bottles in the supermarket and get the payed charge back. Somehow, “Pfand” always prevents me from buying many bottles as I don’t want to make the effort of returning them. Furthermore, my apartment in Germany is on the 4th floor so carrying the bottles all the way from the shop to my home and then up the stairs is another effort I don’t have to take. Because, in the end I can just reuse my bottles and fill them up with water myself. And as reusing plastic bottles isn’t healthy over a longer period of time I reuse glass bottles. I kept doing this here in California, especially as there are so many options to refill the bottle! Following, no plastic bottle trash… (highly recommended, less expensive and very easy to do)

Now looking back on the self intervention in total, I am shocked by how hard it is to actively avoid trash with not putting a lot of effort into it. I also think that after this I will keep on doing this self intervention. Just so you understand me right, I am very happy to not carry my trash around all the time and I will definitely throw away stuff, but my awareness of the trash I produce has risen. I will definitely keep trying to avoid unnecessary trash during grocery shopping or my life in general. I also started to think about: What is actually the point of trash? Why is it bad to throw things away? Is it actually bad? And what happens to my trash afterwards?

For me this intervention was a success as it opened up my eyes for an in my opinion social, human responsibility. We are responsible for what as well as in which amount we throw away and following its effect. It is something one does not think of because we are in the position: We CAN throw away! We can throw away without hurting us directly. It is easy and fast. And we have more valuable things. Furthermore, we are pushed to throw away as the industry standards of packaging cause people throwing away. On the other side one has to consider what happens to what we throw away. Is it literally “wasted” ? Or will it be reused? I am curious about what’s “bad” or “good” trash and will definitely look into the effects of what I am throwing away. Because, in the end it is my responsibility…