So Monday, October 7th was my first day of fully following the don’t throw anything away rule. I was in Disneyland all weekend and knew that carrying all the trash I would probably accumulate would make going on the rides and walking around both difficult and annoying. Although I didn’t hold onto all of my trash, I was definitely more conscious about the waste I was throwing into the trash cans, such as a plastic cup from an ice cream or a paper rapper from a churro. (Yes I definitely went to Disneyland for all the food lol.)

As for my progress so far, I am actually surprised at how little trash I had for one day. I had one food container and a dirty paper towel. I think this is due to being so busy that I did not have time to stop for a bite to eat until after 8pm. Normally I think I would have more trash due to the packaging of most foods, especially snacks that are easy to take all day to campus. Although my reasoning for having such little trash is not the best health wise, I am glad that I didn’t have a lot of trash for the first day of this intervention. I hope the rest of it goes this well, but unfortunately I have a feeling there will be more trash to come due to the excessive packaging used these days. 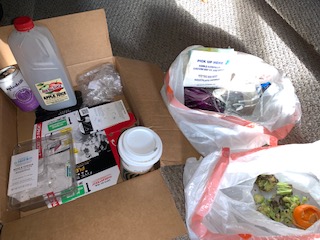 This was my trash after a week of collecting it. I was actually surprised at how little trash I had collected. I think this picture actually makes it look like I had more trash than I really did because all the recyclables were spread out and I used a large trash bag to hold the compost for the week.

Most of my trash was from food packaging but the biggest item was a box from Amazon. Although the box wasn’t over the top for the package that I received, I know a lot of the time Amazon over packages a lot of their items. I think that is a huge issue with the growing amount of waste in land-fields today.

Having to watch how much trash I created throughout the week definitely made me think more about my daily consumption habits. For example, instead of just using a paper towel to set my bagel on while I put cream cheese on it, I used a plate because even though I’d need to clean it, I wouldn’t have to throw it into my trash. Also when I went to Starbucks, I remembered to bring a reusable cup from home.  Normally when I buy Starbucks it’s not preplanned so I don’t bring a cup but after realizing how much waste that can add up to, I want to start only buying Starbucks when I have a reusable cup with me.

After knowing how easy it is to create trash and that simple choices can help reduce waste, I want to be more conscious about my choices and continue to do the small steps that I can to minimize my footprint. I think this self intervention was very useful.